Earlier this year I was able to visit the Waterbeach Military Heritage Museum located on the former RAF Waterbeach airfield; creating the museum has been quite an achievement and a very worthy cause. The museum contains many interesting photographs and artefacts relating to life at “the ‘Beach”, from its inception in 1940 right through to its final closure in 2013.

The current Museum was opened after the Army’s departure and the subsequent closure of the barracks. It is currently housed in Building 3 just inside the main entrance next to the former guard-house, and access is strictly controlled, and by prior arrangement only. It was created by the then curator, Oliver Merrington, along with a handful of local people who wanted to secure the future of the museum and keep the memories of Waterbeach alive for future generations. Mr. Merrington has since sadly passed away, but the volunteers continue the good work he put in place.

Whilst the museum is currently small, it holds a tremendous amount of information, all  of which is neatly displayed in cabinets and on the walls. Many original photographs are supplemented with official documents, personal stories, newspaper cuttings and artefacts, some of which relate to specific aircraft from Waterbeach’s history. 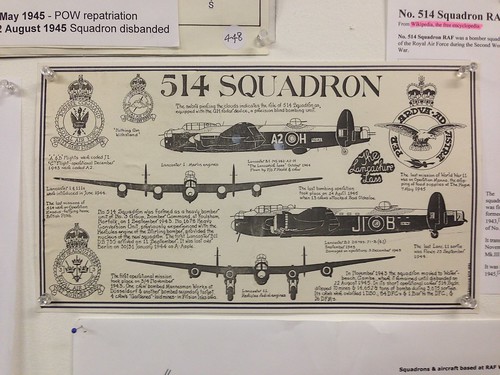 Part of one of the many displays in the museum.

Whilst most of the displays reflect life at Waterbeach during the Second World War, various aspects reflect its post war life, both with the RAF and with the Army’s Engineer Regiment – the founders of the original Waterbeach Museum in 1984.

The two rooms of the museum are dedicated to all these people, taking you on a journey through the life of Waterbeach, starting with the sad First World War story of three brothers: Sgt. Jack Day, (1st July 1916), Private Walter Day (1st July 1916) and Private Clifford Day (13th August 1918). Like so many families of the war, their lives were all taken prematurely, two of which occurred on the first day of the first Battle of the Somme. The three brothers, whose ages ranged from 19 to 22 years old, were all local boys to Waterbeach, and like so many, left a family devastated by their loss. Two of the boys remain buried abroad but Walter, like so many other young men, has no known grave and remains missing.

From here the display takes us to Waterbeach in the 1940s, the story of its construction and design are told using photographs taken at that time. Representations of the various bomber squadrons who used the airfield are supported with operational details, personal stories and artefacts relating to individual aircraft that flew from Waterbeach during these early war years.

In the post-war period Waterbeach was transferred to the Transport Command and again photographs and documents show the range of aircraft that flew from here: Liberators, Dakotas, Lancastrians and Avro Yorks.

Into the jet age and we see a flying suit, and a canopy from Gloster Javelin XH871, which ended its days at Bovingdon as a fire fighting air frame. It is particularity significant as it previously served here at RAF Waterbeach in the late 1950s. 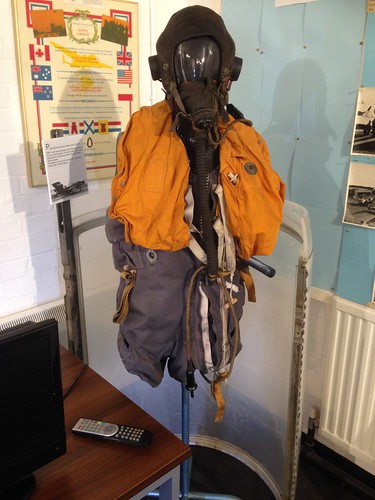 One of the many exhibits on display at the Museum.

After the Royal Air Force departed the base was handed over to the Army, and a small number of exhibits represent their presence here at Waterbeach. The Royal Engineers finally departed the barracks themselves in March 2013.

Other exhibits on display here include: the weather vane from the station church (now demolished), the operations boards, astro-compasses, radios and telephone equipment, all neatly arranged inside glass cabinets. A detailed history of one of the former gate guards, Spitfire LF MK.XIVe ‘TE392’ which now flies with the Lone Star Flight Museum, Galveston, Texas, is also on view.

This is a delightful little museum that has been put together to pay homage to those who served at Waterbeach, either under RAF command or with the Royal Engineers. It is run by volunteers and relies on charitable donations to keep it running. Like many museums, it has limited opening hours, but the range of material is fabulous and it deserves a great deal of public support.

On a final note, my personal thanks go out to Adrian Wright who gave up his own time to open up and show me around the museum.

For details of opening times and other information the curator can be contacted via email at:  waterbeachmilitarymuseum@waterbeach.org