Following on from the first part of this Trail, we see how Debden was thrust into the Battle of Britain and the historic changes that followed.

On August 18th 1940,  at 17:30, the squadron consisting of thirteen aircraft were scrambled to patrol the Skies over Debden. Almost immediately they were diverted to Canterbury and ordered to patrol at 20,000 ft. Five minutes after reaching their designated point, they were ordered into battle attacking ‘raid 51’ who were crossing the coast in the vicinity of Folkestone. Within minutes, the two formations were entwined and the aircraft of 85 squadron set about the 150 – 250 machines of the Luftwaffe.

A mix of J.U. 87s, H.E.111s, J.U. 88s, M.E. 110s and M.E. 109s were staggered in layers between 10,000 feet and 18,000 feet, and as soon as the aircraft of 85 squadron were sighted, the enemy immediately employed tactical defensive manoeuvres with some of the bombers heading seaward whilst other climbed toward their fighter protection.

Hugely lacking in aircraft numbers, the RAF  had little choice but to ‘dive in’, as a result large numbers of individual ‘dog fights’ occurred, resulting in aircraft being strewn across the Essex sky around Foulness Point.  For a while there was complete chaos, aircraft were burning and crews knew little of each other’s whereabouts. In one incident P/O. J. Marshall (Yellow 2) followed his leader into attack. In the melee that followed Marshall flew into a cloud of vapour created by a damaged H.E.111 his wing colliding with the tail of the Heinkel severing it completely and cutting the wing tip-off of his own aircraft. Despite the damage Marshall nursed his crippled aircraft to Debden where he landed safely and unhurt.

85 Squadron casualties on the day consisted of one Hurricane destroyed and one damaged. It was during this attack that  Flight Lieutenant Richard H.A. Lee, D.S.O., D.F.C. (s/n 33208), flying as Blue 1, was last seen by Sqn. Ldr. Townsend and F/O. Gowers 10 miles east of Foulness Point chasing 5 Me 109s. He lost contact and failed to return to Debden.  Lee, a veteran with nine victories to his name, was Lord Trenchard’s Godson, and was reported missing that day. *2

On the next day, 19th August 1940, 85 Squadron departed Debden, swapping places with 111 squadron who had previously moved to Croydon. In a signal Air Chief Marshal Sir Cyril Newall, G.C.B., C.M.G., C.B.E., A.M., expressed his thanks to the crews of 85 Sqn, sending his gratitude for “all your hard fighting” in which he added “This is the right spirit for dealing with the enemy.” 85 Squadron went on to continue the fight at Croydon flying in the same determined manner they had shown whilst based at Debden.*2 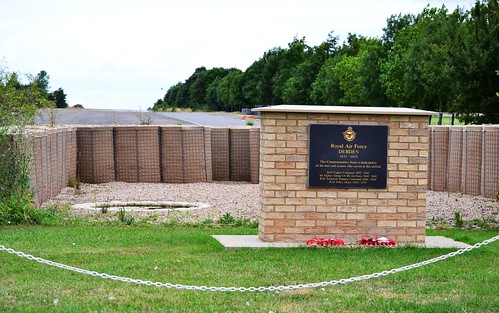 The memorial at Debden sits at the end of the north south runway (seen behind).

It was also during August 1940 that Debden became a focus for attacks by the Luftwaffe. On the 20th, a small reconnaissance mission took German aircraft over the airfield along with other airfields in the region. Six days later, on August 26th, the first attack on Debden would occur, a combined attack that would also involve strikes on Kenley, Biggin Hill, Hornchurch and North Weald airfields.

Whilst 11 Group – whose sector headquarters were at Debden – put up ten squadrons and one flight to intercept the incoming raiders,  a number of bombers did get through and over 100 bombs were dropped on the airfield damaging the landing area; the sergeants mess, NAAFI , a motor transport depot and equipment stores. In addition to this the water and electricity supplies were both cut, and five personnel were killed. The raid was made worse by the inefficient vectoring of protective aircraft from Duxford due to them being unable to obtain the correct radio frequency. This mishap did little to help the ongoing ‘dispute’ between Air Marshal Sir Keith Park and Air Vice-Marshall (later Air Marshal) Sir Trafford Leigh-Mallory, who were both locked in dispute over the defences of 11 Group’s airfields – it was arguably this feud that eventually cost Park his command of 11 Group, and a move as AOC to Malta.

At the end of August, Debden would once again become the focus of Luftwaffe attacks. Shortly after 8:00am on the morning of August 31st 1940, waves of Luftwaffe bombers flew over Kent turning northwards toward North Weald, Duxford and Debden. A formation of Dornier bombers managed to reach Debden again where they dropped over 100 incendiary and high explosive bombs on the airfield. This time the sick quarters and barrack blocks received direct hits whilst other buildings were damaged by blasts.

Further attacks on September 3rd and 15th failed to materialise and Debden was finally left alone to lick its wounds and repair the damage to its fragile infrastructure. It was also during this time (2nd September to the 5th September 1940) that all three resident squadrons: 257, 601 and 111  would depart, leaving Debden behind and heading further south to pastures new.

With the ending of the Battle of Britain, things would become a little quieter at Debden, although movements of man and machine would continue with a perpetual occurrence. The October and November would see more short stays: 25 squadron (8th October for around two and half months); 219 Sqn as a detachment for two months, and 264 Sqn at the end of November for just one month. These changes would lead Debden into the new year and 1941.

During 1941, 85 Squadron would return yet again, and after being bounced around with almost regular occurrence this, their final visit, would be in the night fighter role. Initially using their Hurricanes and then Defiants, they soon replaced these with the Havoc before vacating the site for good and the fields of Hunsdon in May that year.

One of these squadrons, 403 Squadron flying Spitfire VBs, was formed as a result of Article XV of the Riverdale Agreement, in which it was agreed between the British Government and the nations of the commonwealth: Canada, Australia and New Zealand; that their trained military personnel would fly and operate as part of the Royal Air Force. This would mean that both air and ground crews would perform their duties under RAF command. Some 70 squadrons were created as a result of this agreement, and of those seventy, 67 were numbered in the 400 series. Even though they were part of the RCAF, RNZAF and RAAF, they were treated as integral parts of the British Royal Air Force for the duration of the conflict.

Into 1942 and yet more of the same, 350, 41, 124, 232 and 531 Squadrons all following this similar pattern of short stays and placements, thus life at Debden was becoming a constant carousel of ground crews and flying personnel. Two squadrons from here did make a real name for themselves though, that of 71 and 121 Squadrons.

In Part 3, we see Debden take on a new owner, its fortune changes and it becomes home to one of the most famous Fighter Groups of the USAAF – the 4th Fighter Group.