Not far from Wethersfield, lies the parent airfield of Castle Camps. Now closed to aviation, it currently resides in the hands of the Army as the Carver Barracks. On this next part of this Trail we wind our way through the Essex countryside to the former fighter station that gained notoriety during the early 1940s, and in particular the Battle of Britain. In this, the first part of the visit, we look into the development of the airfield, and the build up that took it into the heart of the Battle. We visit the former RAF Debden.

The internet and history books are awash with pictures and information about RAF Debden, and rightly so. It is an airfield with an incredible history, famous for its part in the Battle of Britain and the defence of London, it was home to no less than thirty RAF squadrons at some point; it was used by the U.S. volunteer squadrons the ‘Eagle Squadrons’, and then taken over by USAAF as a fighter airfield following their official entry into the war. It was then used again by the RAF post war up until 1975 when the British Army took over,  those whose hands it remains in today as the Carver Barracks.  Not only is it history long but the site is historically highly significant. According to Historic England, Debden airfield represents “one of the most complete fighter landscapes of the Battle of Britain period“, considered historically important due to its “largely intact defensive perimeter and flying-field with associated blast pens“.*1

Debden is therefore a remarkable site, but as an active military base, access and views are understandably very restricted. However, some buildings can still be seen from public areas, particularly the front as you pass by the main entrance. 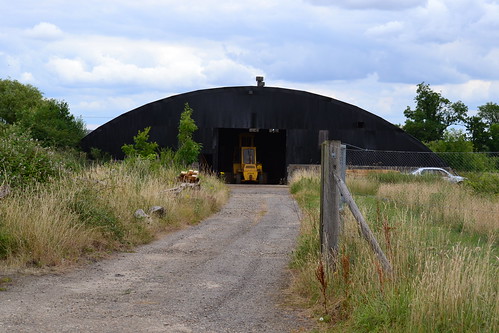 One of 11 Blister Hangars built at Debden.

Debden’s life began in the mid 1930s, it eventually opened in 1937, as part of the expansion programme of the pre-war era, and was classified as a fighter airfield under Scheme ‘C’ of the airfield construction programme. During this period, great consideration was given to the architectural features of airfield buildings, standard designs being finished and positioned aesthetically in line with both the local landscape, stone and environment. Design and construction of these airfields, in this the second part of the expansion phase, was carried out in conjunction with the Royal Fine Arts Commission, whose influence led to an overall improvement in airfield design. During this phase of expansion, over 100 permanent sites were built using these new designs, in fact, according to Historic England, it is these sites that have tended to survive in the best condition to date largely thanks due to their post war and Cold War usage. Even in this pre-war period, aesthetics were as important as operability!

Built by W. L. Fench Limited, Debden wasn’t completed until after it had been opened, thus the first units there were using the site in its unfinished state. The two initial landing surfaces were grass, but as a fighter airfield little more was needed. Even so, and not long after it opened, these were replaced by concrete and tarmac surfaces, giving the airfield much stronger and more adaptable landing surfaces. Being the standard 50 yards wide, these runways were also extended from the initial 1,600 and 1,300 yards to 2,600 and 2,100 yards respectively, allowing for larger and more powerful aircraft to utilise the site.

Debden had a large number of hangars built: three ‘C’ type, one Bellman and eleven blister hangars which were all spread around the perimeter and technical areas of the airfield. Some 80 hardstands were also provided, thus large quantities of aircraft were expected to use the site at one point or another.

Of these thirty operational flying squadrons to pass through Debden, the primary aircraft to see service would be the Spitfires and Hurricanes of Fighter Command. Biplanes such as the Demon and the Gloster Gladiator were also to feature here, as were the twin-engined aircraft the Beaufighter, Havoc/Bostons and the jet engined Meteor in the latter stages of the war. The period 1939 – 1942 though, was by far the busiest period for Debden, the majority of squadrons operating from here during this time.

Upon opening in 1937, Debden would operate the outdated and obsolete biplanes of the Royal Air Force, Hawker’s Fury II of 87 squadron being the first to arrive on 7th June 1937, being replaced shortly after by Gloster’s Gladiator, that famous Biplane that protected Malta as ‘Faith’, ‘Hope’ and ‘Charity’. In the summer of 1938, prior to the outbreak of war, Hurricanes were brought in and the entire squadron moved to airfields in France where they would stay until May 1940, when France was invaded by the German forces. Brought back to England, a short two-day stop over at Debden, would lead to a move north and Yorkshire before returning to the battle, and a night fighter role over Southern England.

Joining 87 Sqn in June 1937 were further Gladiators, those of 80  Squadron who, themselves formed a month earlier, would stay at Debden until departing for the Middle East and Ismailia a year later. A third squadron would arrive during this time, 73 Squadron, who shortly after reforming at nearby Mildenhall, would also replace their Hawker Furys with Gladiators coinciding with their move to Debden. Also moving to France, 73 Sqn would eventually move to the Middle East, where they would remain for the duration of the war, flying from numerous airfields including that of Habbaniyah, one of several places where my father was stationed post-war.

One other squadron would grace the skies over Debden that year, that of 29 Squadron, whose Hawker Demons were adapted to accept a Frazer-Nash turret for defence. A small aircraft, they would be no match for enemy fighters and so were replaced in December 1938 by the far superior aircraft the Blenheim IIF. Coinciding with this, was the movement of a detachment of 29 sqn aircraft to Martlesham Heath, which was followed by a months stay at RAF Drem in the border region before returning to Debden once more. By the end of June though, the entire squadron have been pulled out of Debden and moved to Digby in Lincolnshire and a new role as night fighters.

1938 also saw the reforming of 85 Squadron on the 1st June. 85 sqn, as a unit, had their roots in the First World War, being stationed in France before disbandment in the summer of 1919. But on this occasion, they were reformed out of ‘A’ Flight of 87 squadron prior to them taking on their Hurricanes and imminent move abroad. During the period 1939 – 1940, 85 Sqn would move around almost weekly, with one of their longest permanent stays being between November 1938 and September 1939 whilst here at Debden. Being the parent airfield of Castle Camps, Debden units would often be dispersed there, or in some cases stationed there, whilst also operating out of Debden – 85 Sqn being no exception.

Two other squadrons would fly from Debden during the winter/spring of 1939 – 40, both 17 and 504 operating the Hurricane MK. I. On an almost weekly basis, both units would yo-yo between Debden and Martlesham Heath, an almost continuous spiral of postings saw them using the ‘Heath’ as a forward operating airfield until around May 1940, when both units were moved to France in support of the B.E.F.

As the fall of France turned into the Battle of Britain, fighter units to defend Britain became top priority. The dawn of 1940 would see the beginning of six more squadrons operate out of Debden, the majority of which would arrive during the height of the Battle. Debden, as the Sector Station responsible for the Thames Estuary and eastern approaches to London, would become a prestige Luftwaffe target during those early days of the Battle. As a result, it along with other Sector stations at Northolt, North Weald, Biggin Hill, Tangmere and Hornchurch, would endure some of the most sustained and prolonged attacks by German bomber formations.

To meet the demand for fighter units, 257 Squadron were reformed and posted to Debden initially flying the Spitfire MK. I. They quickly replaced these with the Hurricane I prior to them becoming operational on July 1st. Four days later they were joined at Debden by both 601 (the ‘Millionaires Squadron’ named so after the men who initially joined it) and 111 Squadron making this one of the largest collections of Hurricanes at that time.

85 Squadron were soon in the thick of the battle. As July 1940 turned to August, patrols would be sent up as regularly as the sun would rise, many of these patrols would result in enemy engagement; the Operational Record Books being testament to the continuing battle for the skies over Britain at that time. At the beginning of August on the 7th, Air Vice-Marshal K.R. Park M.C., D.F.C. visited  Debden, a visit that preceded the transfer of Debden from 12 Group into 11 Group. It was also at this time that the funeral of P/O. Britton of 17 Sqn took place, a young man who lost his life in a flying accident on the 6th whilst carrying out an air test in Hurricane N2456. In poor weather, visibility of only four miles, P/O Britton crashed into Debden Park destroying the aircraft in which he lost his life.

In mid August 1940, both ‘A’ and ‘B’ flights of 85 Sqn were brought back from Martlesham Heath and Castle Camps to Debden, a move that preceded the not only the first but one of the largest attacks by a Debden squadron on enemy aircraft.

In part 2, we see how Debden was affected by the German campaign, the relentless attacks that drew Debden crews into battle. We look at the changes at Debden and how the American made a name for themselves as determined and fearless fighter pilots.