After visiting the many museums and former airfields in the southern and central parts of Kent (Trail 4 and Trail 18) we now turn north and head to the northern coastline. Here we overlook the entrance to the Thames estuary, the Maunsell Forts – designed to protect the approaches to London and the east coast – and then take a short trip along the coastline of northern Kent. Our first stop is not an airfield nor a museum, it is a statue of the designer of one of the world’s most incredible weapons – the bouncing bomb. Our first short stop is at Herne Bay, and the statue of Sir Barnes Wallis. 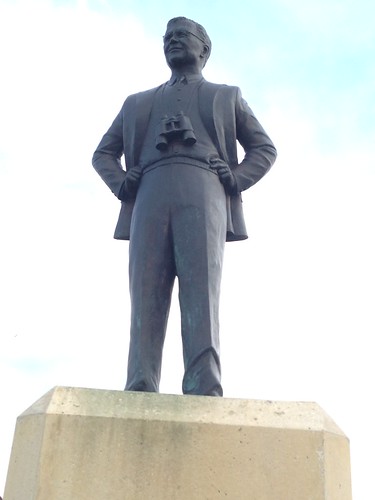 The Barnes Wallis statue located at the eastern end of the town overlooking the sea at Reculver.

There cannot be a person alive who has not seen, or know about, the famous Dambusters raid made by 617 Sqn. It is a story deeply embedded in history, one of the most daring raids ever made using incredible ideas, skill and tenacity. There is so much written about both it, and the man behind the idea – Sir Barnes Neville Wallis CBE FRS RDI FRAeS – a man famous for his engineering prowess and in particular the famous ‘Bouncing Bomb’ that was used by Guy Gibson’s 617 Squadron in that daring raid of 16th May 1943. But there is so much more to Barnes Wallis than the Bouncing bombs; he made a huge contribution to British Aviation, weaponry of the Second World War, and later on in his life, supersonic and hypersonic air travel.

He is certainly one the Britain’s more notable designers, and has memorials, statues and plaques spread across the length and breadth of the country in his honour. But he was not just a designer of the Bouncing bomb, his talent for engineering and design led him through a series of moves that enabled him to excel and become a major part of British history.

Born on 26th September 1887 in Ripley, Derbyshire, he was educated at Christ’s Hospital in Horsham, he went on to study engineering in London, and shortly afterwards moving to the Isle of Wight. With the First World War looming, he was offered a chance to work on airship designs – an innovative design that would become widely used by the Naval forces of both the U.K. and Germany.

Wallis cut his teeth in marine engines as an engineer and draughtsman. He began his career in the London’s shipyards, moving to the Isle of Wight after which he broke into airship design. He followed a colleague he had met whilst working as a draughtsman with John Samuel White’s shipyard, together they would design His Majesty’s Airship No.9 (HMA 9).

The design process of HMA 9 was dynamic to say the least. Early non-rigid airships were proving to be very successful, and the new rigids that were coming in – whilst larger and more capable of travelling longer distances with greater payloads – were becoming the target for successive quarrels between the government and the Admiralty. World unrest and political turmoil was delaying their development even though plans for HMA 9 had already been drawn up.

Joining with his colleague, H.B. Pratt in April 1913, at the engineering company Vickers, the two designers began drawing up plans for a new rigid based along the lines of the German Zeppelin. HMA 9 would be a step forward from the ill-fated HMA No. 1 “Mayfly”, and would take several years to complete. Further ‘interference’ from the Admiralty (One Winston Churchill) led to the order being cancelled but then reinstated during 1915. The final construction of the 526 ft. long airship was on 28th June 1916, but its first flight didn’t take place until the following November, when it became the first British rigid airship to take to the Skies.

With this Wallis had made his mark, and whilst HMA 9 remained classed as an ‘experimental’ airship with only 198 hours and 16 minutes of air time, she was a major step forward in British airship design and technology.

The Pratt and Wallis partnership were to go on and create another design, improving on the rigids that have previously been based on Zeppelin designs, in the form of the R80. Created through the pressure of war, the R80 would have to be designed and built inside readily available sheds as both steel and labour were in very short supply. Even before design or construction could begin there were barriers facing the duo.

Construction started in 1917, but with the end of the war in 1918, there was little future as a military airship for R80. Dithering by the Air Ministry led to the initial cancellation of the project, forcing the work to carry on along a commercial basis until the project was reinstated once more. With this reinstatement, military modifications, such as gun positions, were added to the airship once again. With construction completed in 1920, she made her first flight that summer. However, after sustaining structural damage she was returned to the sheds where repair work was carried out, and a year later R80 took to the air once again. After a brief spell of use by the U.S. Navy for training purposes, R80 was taken to Pulham airship base in Norfolk and eventually scrapped. Wallis’s design had lasted for four years and had only flown for 73 hours.

However, undaunted by these setbacks, the Vickers partnership of Pratt and Wallis went on to develop further designs. In the 1920s, a project known as the 1924 Imperial Airship Scheme, was set up where by a Government sponsored developer would compete against a commercial developer, and the ‘best of both’ would be used to create a new innovative design of airship that would traverse the globe. This new design, would offer both passenger and mail deliveries faster than any current methods at that time.

The Government backed design (built at the Royal Airship Works at Cardington) would compete against Vickers with Wallis as the now Chief Designer.

The brief was for a craft that could transport 100 passengers at a speed of 70 knots over a range of 3,000 miles. Whilst both designs were similar in size and overall shape, they could not have been more different. Wallis, designing the R.100, used a mathematical geodetic wire mesh which gave a greater gas volume than the Government’s R101, which was primarily of stainless steel and a more classic design. This geodesic design was revolutionary, strong and lightweight, it would prove a great success and emerge again in Wallis’s future.

Built at the Howden site a few miles west of Hull, the R100 was designed with as few parts as possible to cut down on both costs and weight; indeed R100 had only 13 longitudinal girders half that of previous designs. Wallis’s design was so far-reaching it only used around 50 different main parts.

The 1920s in Britain were very difficult years, with the economy facing depression and deflation, strikes were common place, and the R100 was not immune to them. Continued strikes by the workers at the site repeatedly held back construction, but eventually, on 16th December 1929, Wallis’s R100 made its maiden flight. After further trials and slight modifications to its tail, the R100 was ready. Then came a test of endurance for the airship, a flight to Canada, a flight that saw the R100 cover a journey of 3,364 miles in just under 79 hours. Welcomed as heroes, the return journey would be even quicker. Boosted by the prevailing Gulf Stream, R100 made a crossing of 2,995 miles in four minutes under 58 hours. The gauntlet had been thrown, and Wallis’s airship would be hard to beat.

The R101 would face a similar flight of endurance, this time to India, and it would use many of the same crew such was the shortage of experienced men. On October 4th 1930, R101 left its mooring at Cardington for India. Whilst over France she encountered terrible weather, a violent storm caused her to crash, whereupon she burst into flames and was destroyed with all but six of the 54 passengers and crew being killed.

The airship competition became a ‘one horse race’, but an inspection of the outer covering of Wallis’s R100 revealed excessive wear, only cured by replacing the skin, an expense the project could barely swallow. With plans already in place for the R102, the project was in jeopardy, and eventually, even after offers from the U.S. Government, it was deemed too expensive, and by 1932 R100, the worlds largest airship and most advanced of its time, had been scrapped and the parts sold off.

Wallis’s airship career had now come to an end, but his prowess and innovation as a designer had been proven, he had set the bench mark that others would find hard to follow.

In the next part, we look at the work carried out by Wallis both during the Second World War and in the later years of his life.