In the second part of this visit we look into the current display of military aircraft at East Fortune. A collection that ranges from the Second World War through to the end of the Cold War, it is a glimpse into the history and development of fighter aircraft over the last half of the 1900s.

Early examples include the Bristol Bolingbroke IV-T, the Canadian built Blenheim that was used to train air gunners, navigators and bomb aimers. 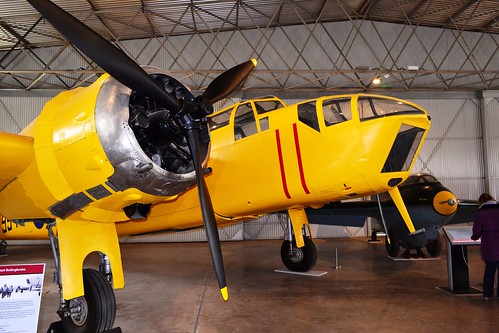 The Bristol Bolingbroke, an ex Strathallan collection model that served with the R.C.A.F.

The Bolingbroke had a crew of three, with a top speed of 266 mph. It was initially a Blenheim MKI (designated Bristol Type 142M) and was first flown at Filton on 24th September 1937.

Morphing into the Blenheim, the Bolingbroke soon passed into obscurity, however, it did catch the eye of the Canadian Government, who applied to build it under licence at the Fairchild Aircraft Company in Quebec.

The original prototype model was sent to Canada and used as a pattern for subsequent designs, the first model entering Royal Canadian Air Force (R.C.A.F.) service in November 1939. For the first few years, Bolingbrokes were used in the anti-submarine role, initially along the eastern coast of Canada and then later on, after the Japanese attack on Pearl Harbour, along the western coast .

The Canadians made a number of changes to the original design, installing U.S. dials and instruments in a modified cockpit for one, and also making room to store a dingy should the aircraft come down in the icy waters around Canada.

Then as part of the agreement made between the Canadians and British for Canada to supply trained crews as part of their support for the war effort, Bolingbrokes were used as training aircraft, and so were supplied to various Gunnery and Flying Training Schools across Canada.

This particular example ‘9940’, is painted in a yellow colour scheme, it flew as part of this British Commonwealth Air Training Plan. It is an ex Strathallan collection aircraft previously used by the R.C.A.F. No. 5 Bomber and Gunnery School, Dafoe, Saskatchewan in Canada.

Another wartime example in the military hangar is the Supermarine Spitfire  LF.XVIe. Built in July 1945, TE462 never saw active war service, instead flew with one of the five Flying Refresher Schools to retrain pilots after the Second World War. Post service, it was used as a gate guard at RAF Ouston, Northumberland, in a time when the R.A.F. flew D.H. Vampires from the airfield. In 1968 TE462 was removed from Oulton to be used in the highly acclaimed film the ‘Battle of Britain’. Being  a much later model to those classic 1940 examples, extensive modifications would have been needed if it were to appear in any flying roles on camera.

In 1971, TE462 was donated by the Ministry of Defence to the now National Museum of Scotland, who were then, due to lack of space in Edinburgh, allowed to use one of the hangars at East Fortune for her storage.  It was this move that helped generate the ideas and movements that created the museum as it is today. Spitfire ‘TE462’ stands proudly as the centre piece of the military exhibition. 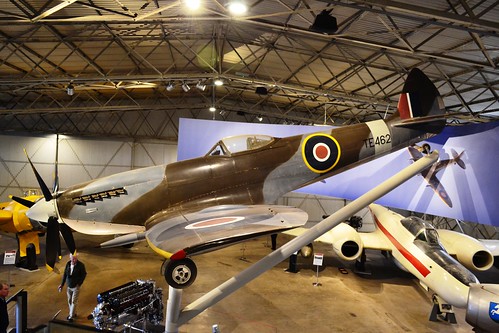 Spitfire LF.XVIe ‘TE462’ now stands on a plinth as the centre piece of the East Fortune Military Hangar.

Another Second World War Example is the German Messerschmitt Komet Me 163B-1a. Another 1945 example, this model (s/n 191659) is unique in that it was flown by R.A.F. pilot Captain Eric ‘Winkle’ Brown. The Komet, built by various manufactures using slave labour, was the only rocket-powered aircraft ever to enter combat. A very dangerous aircraft to fly because of its mixture of explosive fuels, Brown described its handling to 32,000 ft as “Fantastic!”. 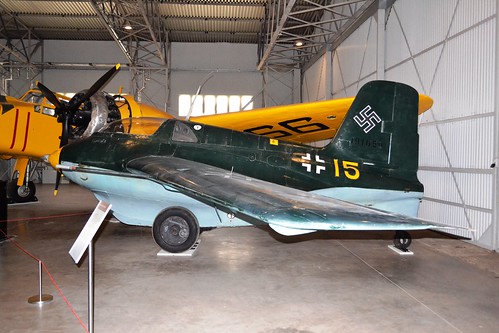 Post war and Cold War examples make up for most of the exhibits in this hangar at East Fortune. The nose section of Canberra B.8 reported to be VX185, is an ex Wroughton exhibit, the original of which flew a return flight to Canada in 10 hours 3 minutes and 29.28 seconds, setting a new transatlantic record at that time. The Canberra being a revolution in aircraft design in the early post war era, was used to fly long-range reconnaissance missions and proved its worth for many years to come. 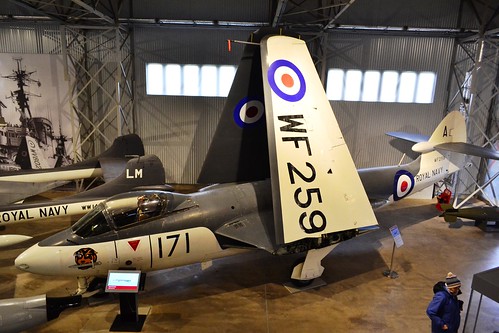 Two Royal Navy aircraft examples are found in this hangar, the Hawker Sea Hawk and the D.H. Sea Venom.

The Sea Hawk ‘WF259’ (171) is an F.2 model and a Lossiemouth veteran. Designed around a Rolls-Royce Nene 101 and latterly 103 engine, they were single seat fighters that first flew as a prototype on 2nd September 1947. Whilst not seen as a major step forward from the RAF’s Vampires and Meteors, it was successful with the Navy, proving its worth in the ground attack role. The Sea Hawk, a thoroughbred from the Sir Sydney Camm stables, formed the backbone of the Fleet Air Arm during the 1950s and was exported to various European countries and India, where many still survive as museum pieces today.

The D.H. Sea Venom, an FAW.22, WW145 ‘680’, is also an ex Lossiemouth veteran. Serving with both 891 and 750 Naval Air Squadrons of the Fleet Air Arm. It was a naval development of the RAF’s 2-seater Venom NF3 Night Fighter, with numerous modifications to enable it to operate from carrier decks. 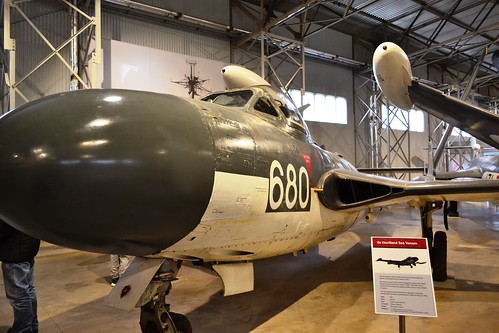 The D.H. Sea Venom operated with both 891 and 750 Naval Air Squadrons of the Fleet Air Arm.

A Meteor NF.14 of The Ferranti Flying Unit based at Edinburgh’s Turnhouse Airport, is painted in white and red giving it a distinctive paint scheme. The unit was set up in 1949 to test distance measuring equipment for the Ferranti group whilst based at the airport. Between its inception and disbandment in 1973, it flew twenty-five different models of aircraft, the long-nosed NF.14 being just one of them. 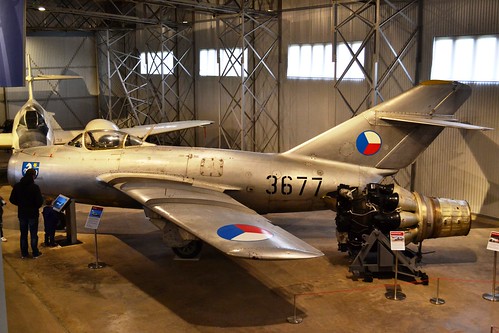 International Cold War aircraft are represented with the Czechoslovakian marked Aero S-103. A Soviet MiG-15bis, it was built under licence by the Aero Vodochody aircraft company in 1956. The Mig proved itself as a very potent fighter during the Korean War, attacking U.S. bombers from beyond their defensive gun range. Whilst it did have its flying limitations, it was quickly realised as a close match for the American F-86 Sabres.

This particular model, ‘3677’ is an ex Caslav, Ostravian Air Regt. c/n 613677 of the Czechoslovakian Air Force, the badge just visible on the nose is that of the City of Ostrava. 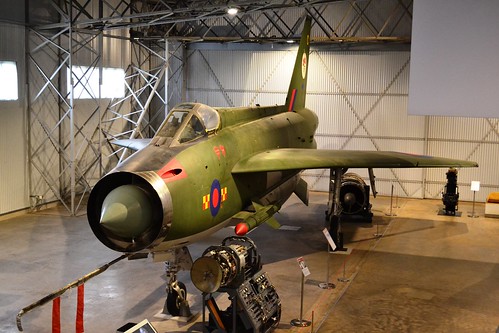 The Lightning, F.2A ‘XN776’, built by English Electric (B.A.C./B.A.) served with 92 Squadron, and was the only Mach 2 all British aircraft to serve with the R.A.F. Lightning XN776 first flew (as an F.2) on 18th October 1962 subsequently being delivered to 19 Squadron. After seven years, she was returned to Warton for conversion work to upgrade her to an F.2A model, and then delivered to 19 squadron at Gutersloh a few months later. Her last operational flight was on 3rd March 1977, being flown to Leuchars on April 5th that year. She displays on her tail, the blue diamonds that represent the Blue Diamond Aerobatic team that previously used Hunters with 92 Squadron. With a maximum speed of 1,500 mph (Mach 2.3) and a service ceiling in excess of 60,000 ft, she was a potent and deadly weapon restricted only by her high usage of fuel.

The Harrier, a GR.1, is the reputed to be the oldest surviving Harrier example, a unique design it is famous for its Vertical or Short Take-Off and Landing (V/STOL) capabilities, now taken on by the F.35 Lightning. This particular model (XV277) was only used for test purposes and never saw operational service. During its life it has taken on many changes and modifications, but it still remains the much-loved Harrier. 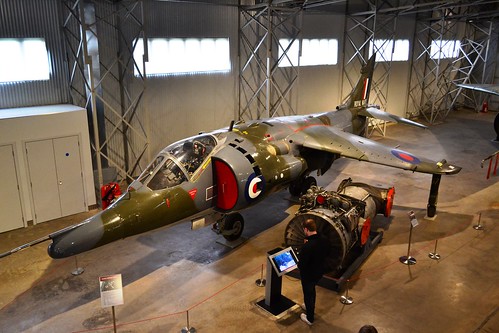 The remaining aircraft here, the Jaguar and Tornado, did however see operational service. The Jaguar ‘XZ119’ (with nose art Katrina Jane), flew 40 operational sorties during the first Gulf War in 1990 / 1991, her nose-art bomb-tally testament to her successes; whilst the Tornado ‘ZE934’ also flew during the first Gulf War, performing air defence patrols from Saudi Arabia. Other than this it operated primarily at RAF Leuchars in Fife with 111 squadron. 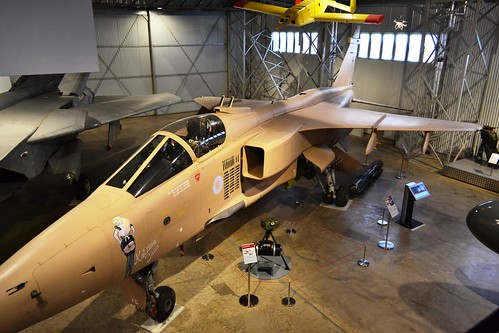 Outside the military hangar is Vulcan B.2 XM597, the mighty ‘V’ bomber designed as Britain’s nuclear deterrent until the role was taken on by the Royal Navy in 1969.  XM597, an ex Waddington aircraft, entered service with 12 squadron on the 27th of August 1963, going on to serve with 35, 50, 9, and 101 squadrons. She also saw service in the Falklands in three of the Black Buck missions.

XM597 was different to other Vulcans in that she had wing pylons fitted. These carried up to four Shrike anti-radar missiles (previously for Skybolt) and were used during these missions. 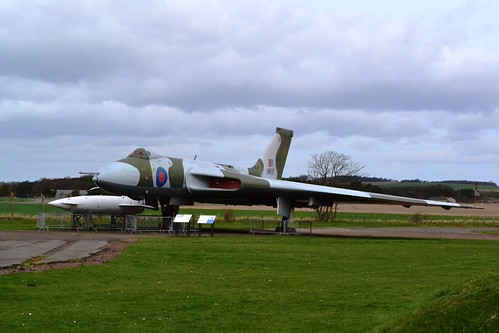 XM597 next to a Blue Steel Stand off missile

Her first mission, Black Buck 4, was cancelled due to a faulty refuelling drogue on a Victor tanker. On the Black Buck 5 mission, on 31st May 1982, the Vulcan took off once again, over the target she fired two missiles causing some minor damage to an Argentinian Radar installation.

On mission six, XM597 returned to the Falklands again armed with more Shrike anti-radar missiles. Two missiles were launched and the enemy ground-based radar was destroyed. On the return leg of the mission though, a planned rendezvous with a Victor tanker went wrong when the refuelling probe on the Vulcan became damaged. With too little fuel to get home to Ascension Island, the Pilot, Squadron Leader Neil McDougall, diverted  to the only airfield he could possibly reach before running out of fuel. Climbing high and jettisoning the remaining two weapons (one failed to release and remained on the pylon), he carefully nursed the Vulcan to Rio de Janeiro where he landed safely and where the aircraft, her crew, and the remaining missile were impounded for nine days before being released.

One of the conditions of the release however, was that XM597 took no further part in the conflict with Argentina and that the rogue missile stayed in Brazil. XM597 later retired to the East Fortune collection in 1984, with her two missile strikes painted on her nose*3. 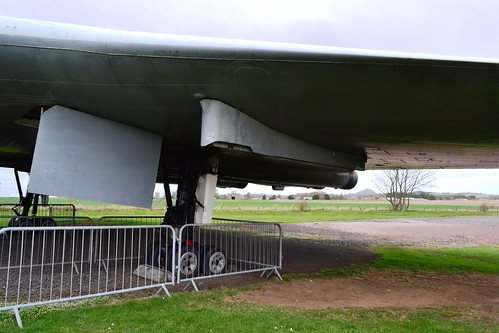 The under wing pylons that carried the Shrike Anti Radar missiles.

The military collection at East Fortune is, like the civil collection, filled with unique and historically important aircraft. A range that stems from the Second World War through the Cold War and on to modern conflicts and models, it is a dynamic collection of aircraft that just cannot fail to impress.