The second airfield on Trail 41 takes us a little further east to Charterhall’s satellite and a site that had strong links with the armed forces of Poland. Remembered here is an usual mascot, a bear known as ‘Wojtek’. We stop off a few miles away at the satellite that was RAF Winfield.

RAF Winfield, located a few miles east of Charterhall, was pivotal to the success of the night-fighter training programme and in particular to Charterhall and 54 Operational Training Unit (O.T.U.).

Charterhall and Winfield cannot be talked about with great reference to each other, they were built together, manned together and operated as part of the same training programme. Winfield and Charterhall probably operated together more closely than any parent / satellite airfields of the Second World War. 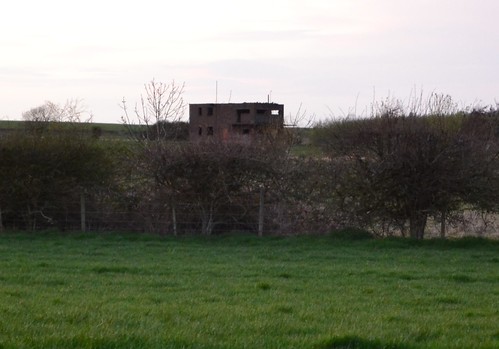 Winfield Watch Office one of the few remaining buildings now derelict and forlorn.

Winfield (like Charterhall) was initially used as a First World War landing ground for 77 Sqn based at Edinburgh flying a range of Royal Aircraft Factory B.E. types in the Home Defence role. Whilst many of these airfields were designated ‘landing grounds’, many were not officially recorded to the point that their precise locations remain vague even today. Winfield (or Horndean as it was known), was designed as a site where crews could land in an emergency, perhaps if their aircraft developed problems or if weather prevented landing at their home station.

77 Sqn were part of a force who were to patrol the eastern regions of Britain, an area stretching from Dover in the south to Edinburgh in the north. This area, was the furthest point north and the defence of the Scottish border region fell to 77 Sqn. The conditions at Horndean were not luxury, and the ‘runways’ were far from smooth, but in an emergency any semi-decent ground was most likely welcome. Crews often practised emergency landings at both Horndean and Eccles Toft (Charterhall), where aircraft guards would restart the aircraft before flight could take place again. These ‘guards’ (or Ack Emas as they were known) were often mechanics recruited into the Royal Flying Corps because of their mechanical background and knowledge of engines. After a brief training period of some eight weeks, they were sent to various establishments to maintain and prepare aircraft before and after flight.

Horndean as an airfield was not to last though, and before the war’s end it would close returning to its former agricultural use.

With the outbreak of the Second World War, the training of pilots and other crewmen became a priority. Night fighters were also needed and Winfield would fulfil this role.

Winfield was built over the period 1941 – 42 opening later than expected, due to bad weather, in April 1942. A rather hastily affair, it was built between two roads and would only have two runways. Oddly, the initial construction of the runway was by hand, red shale from local quarries being brought in by endless lorries and laid down by local workers. It didn’t take long though before it was realised that this method was too slow, and so heavy machinery was brought in, and the stocks of shale bulldozed into the foundations. At the threshold, rubble stone was laid to a depth of some 12 feet, much deeper than the remainder,  to take the impact of landing aircraft. A covering of tarmac was laid over this layer in depths of between four and six inches thick. The runways at Winfield, like Charterhall, were 1,600 and 1,100 yards and both 50 yards wide. Aircraft dispersal was provided by thirty-seven hardstands whilst maintenance was carried out in four blister hangars.

The first personnel to arrive were an advanced party of thirty-four airmen led by Flying Officer Beal, who arrived on April 30th 1942. Unlike Charterhall, the airfield was complete and ready for the new recruits to move straight in. Being a satellite station, accommodation numbers catered for were less than those at Charterhall, 686 airmen and 56 WAAFs, all spread over five sites: three airmen, a WAAF, and a communal site. A small sewage plant was located not far from these, all to the north-eastern side of the airfield.

Trainees were to follow an initial three-tier programme. Starting in ‘A’ squadron – the conversion unit – they would then pass to ‘B’ and then finally onto ‘C’ here at Winfield. C Squadron, would finely tune skills and train aircrew in uses of Aircraft Interception (AI), ground attack and air-to-air gunnery techniques. Later on, a fourth tier would be added, focusing purely in flying the D.H. Mosquito in the night fighter role. 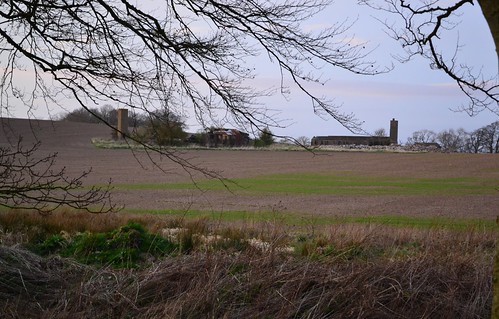 Remains of the former WAAF site.

These initial stages primarily used Beaufighters and Blenheims, aircraft that had been passed down from front line units to the training squadrons of the O.T.U.s. Many were therefore ‘war weary’ and as a result, mechanical problems were common place.

The first fatality at Winfield occurred in a rather bizarre accident on May 23rd 1942. A dispatch rider, Aircraftman 1st Class, John R. Livesey (s/n1478277), was struck by a Blenheim flown by Sgt. J. Grundy as the aircraft was taking off. The aircraft was damaged in the collision and the pilot unhurt, but Livesey was very sadly killed; he now rests at Marton (St. Paul) church in Blackpool.

In August 1942 a combined operation was planned involving Spitfire VBs from 222 Sqn (based at North Weald) and Boston IIIs from Attlebridge’s 88 Sqn. These manoeuvres saw eighteen Spitfires and twelve Bostons arrive, supported by three H.P. Harrows of 271 Sqn bringing ground crews, spares and supplies for the various aircraft. In all, around 360 new crews were accommodated at Winfield over the short two-week period.

Adept at low-level attacks, the two squadrons would arrive here between 1st and 4th August 1942, spend several days attacking ‘enemy’ transport and troop routes across southern Scotland, before departing. Considered a relative success, their stay was only for a short period vacating to RAF airfields at Drem, near Edinburgh, and Attlebridge, in Norfolk, respectively by mid August.

A further deployment of Mustang Is of 241 Sqn based at Ayr was cut short when bad weather prevented both flying and training operations from occurring. Later that month the small party left rather disappointed having hardly flown since arriving here at Winfield.

Being the more advanced tier of the training programme, serious accidents at Winfield occurred less frequently than at Charterhall. Burst tyres and mechanical problems being the main cause of many of the problems that were incurred. 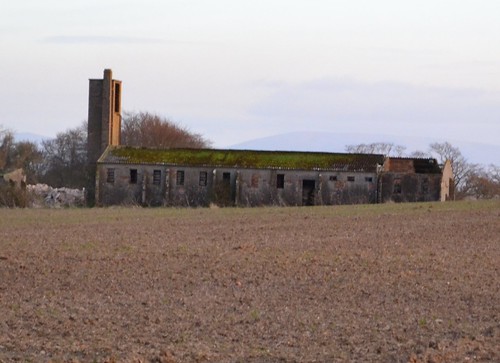 Few buildings remain at Winfield, the WAAF site having the majority of the examples.

During July 1943, a Beaufighter from ‘C’ Squadron at Winfield misjudged the distance from himself to the target drogue being pulled by a Lysander, after firing and passing, his airscrew caught the drogue’s wire; luckily both aircraft were able to land safely and neither crew were injured. At the end of July a less fortunate incident occurred when, on a night flight, the port engine of Beaufighter T3370 (a former 456 Sqn RAAF aircraft coded RX-Z) caught fire. The crew bailed out, the pilot surviving but the Radio operator/navigator P/O. Frank Walmsley (s/n J/17124) of the RCAF was posted missing, presumed drowned, after the aircraft crashed into the sea. No trace was ever found of him.

October saw further deaths of crews from Winfield. On the 11th, Beaufighter VI, (ND184) crashed killing its Pilot Sgt. Angus Taylor, after it suffered engine failure; followed the next day by the crash of Beaufighter T3218 in a gunnery exercise over the North Sea. The aircraft crashed into the water after incurring a stall, both crewmen; F/O. John W. Roussel and F/O. Francis L. Kirkwood both of the RCAF, were missing presumed drowned. Both are commemorated on the Runnymede memorial.

During 1944 the tide began to turn and night fighter crews were on the offensive. The invasion of Normandy brought new hope and a new aircraft – the Mosquito. But as 1944 ended it would be the worst for fatalities in 54 OTU.

January brought many heavy bombers to the grounds of Winfield, returning from missions over Europe, they were either damaged or unable to land at their own respective bases due to poor weather. On February 17th 1945, fourteen Halifax IIIs from 420 Squadron RCAF landed at Winfield along with a further 408 Squadron aircraft. Whilst not able to comfortably accommodate such numbers and aircraft, it would have no doubt been a happy, and very much appreciated landing.

As the war drew to a close so did the number of flying hours. By May 31st the war was over and Winfield was no longer required, all the various ranks were pulled back to Charterhall leaving only a small maintenance party behind. For the next few years Winfield would have no operational units stay here, either temporary or permanently.

In the second part of this visit, we see how Winfield changed after the war, an odd visitor arrives, and Winfield’s decline begins.

4 thoughts on “RAF Winfield and the Polish Connection (Part 1)”