On the outskirts of Ipswich close to the former Cold War bases at Woodbridge and Bentwaters, is what is perhaps a model of the future, of many of our wartime airfields. Built upon with town housing hidden in the ‘Village’ idea, it is a place with major industry and retail parks, where the few remains that exist are hidden amongst the pathways and roads of this large conurbation. However, not all is lost, a museum and modern use of many of its original structures ensure the history of this once busy airfield are not lost forever.  In Trail 40 we head to the southern reaches of East Anglia, to the the outskirts of Ipswich and the former site that was once RAF Martlesham Heath.

Martlesham Heath was opened in 1917, and until it closed in 1963, was the home to a very large number of military units. It was also used by a number of aircraft experimental units, each one investigating the various aspects of aircraft and weapons designs needed in a modern air force. These investigations were carried out initially by the RFC Aeroplane Experimental Station and latterly the Aircraft and Armament Experimental Establishment (A&AEE). Also present at Martlesham were the Armament & Instrument Experimental Unit, the Air Sea Rescue units, and the Battle of Britain Flight (now the Battle of Britain Memorial Flight based at RAF Coningsby). In addition, a Gunnery flight was also based here, as were gliders and numerous squadrons flown by a whole range of Nationalities including: Belgian, Czech, Polish, Australian, Canadian, New Zealand and American airmen. With all these units came a broad and diverse range of aircraft types. Its history is certainly long and very, very distinguished.

The dawn of aviation happened at Martlesham Heath when it officially opened on January 16th, 1917.  During that year, the Aircraft Testing Squadron would arrive here from its base at Upavon to be joined on March 16th 1920 by the Armament Experimental Station from Orfordness. The amalgamation of these two aircraft experimental units would set the foundations for Britain’s future research and development organisation. This marriage, forged the name the Aeroplane Experimental Establishment (Home) until 24th March 1924, when it disbanded to become the better known Aircraft and Armament Experimental Establishment (A&AEE), who carried out their work here, at Martlesham Heath, until the outbreak of war in 1939.

A number of both civilian and military aircraft were tested here, one of the most notable being the enormous all-metal tri-engined transport, the Beardmore Inflexible. Designed by William Beardmore, it had a wing span of 157 feet – 16 feet longer than Boeing B-29. Other aircraft included the 4.F1 ‘Taper Wing’ Camel, a sole example was produced with simplified wing-struts in an attempt to reduce drag and improve the Camel’s performance.  Amongst others featuring at Martlesham, were the Bristol Blenheim, various Auto Gyros and the Bristol Bombay. The A&AEE would be joined in July 1923 by the reformed 22 Sqn who would undertake armament testing investigations; and then, a year later, by the reformed 15 Sqn who would carry out performance and handling trials. Both these units operated solely as trials units, flying  a notional number of aircraft including a: Boulton Paul Bugle II, Fairy Ferret, Gloster Gamecock, Vickers 161 and Hawker Horsley aircraft.

The prototype Bristol Blenheim at Martlesham Heath under evaluation. (IWM)

With the outbreak of war, all sections of the A&AEE, with one exception, was moved for its own protection, to its new base at Boscombe Down. Here its history has become renowned, and many weapons and aircraft developments have taken place since. The exception to the move, was ‘D’ Flight of the A&AEE’s Performance Testing section, who moved to Perth where it became the Royal Air Force Detachment, Perth.

Over the next few years Martlesham Heath would become a major player in the war. Some 60 or so RAF squadrons would pass through here, either permanently based here or as detachments away from their parent bases. The first of these was 64 Sqn RAF flying Hawker Demons. After a short spell abroad, they would return in 1941 with Spitfire IIAs – the first permanently based unit. Other sqn’s that would pass through in these early years included:  29 and 151 Sqn (December 1938); 110 Sqn (June 1939); 25 and 56 Sqn (October 1939);  604 Sqn (September 1939) and 236 Sqn (December 1939).

With the evacuation of the BEF and the subsequent Battle of Britain, Martlesham would become increasingly busy. During 1940 five squadrons would be based here, whilst in 1941, thirteen squadrons would pass through. This would increase to sixteen in 1942; nine in 1943 and only two in 1944; thus the number of units using Martlesham would reflect both the level of the German threat and direction that the war was moving.

Being close to London, Martlesham would play its part in the Battle of Britain. A number of gritty and determined fighter pilots would serve here, including both Group Captain Douglas Bader and Squadron Leader Bob Stanford Tuck.

On September 19th 1940, 71 Sqn was reformed at RAF Church Fenton moving to Martlesham in the following April. Made of volunteer U.S. pilots it was to be one of three ‘Eagle Squadrons’ destined to become famous before the U.S. officially entered the conflict in December 1941. (Also during this time, ‘A’ Flight of the Special Duties Flight would reside here whilst the main parent unit was located at St. Athan, until replaced by the various Radio Servicing Sections).

71 Squadron were initially provided with Brewster Buffalo MKIs, so disappointed with them were they, that it was rumoured the commanding officer ‘instructed’ his pilots to deliberately damage them so that more ‘appropriate’ aircraft would be issued*1. By the time 71 Sqn arrived at Martlesham Heath in early April 1941, these Buffaloes had been replaced and 71 Sqn  was equipped with the much superior Hurricane MKIs, followed soon afterwards, by the Hurricane MKIIA. 71 Squadron then left Martlesham in June 1941 only to return in December that year with Spitfire VBs. They finally departed in May 1942 thus ending their presence  at the ‘Heath’ for good. It wasn’t the last of the Eagle squadrons though, for a very short period of about eight days, 133 Squadron graced the grounds of this Suffolk airfield before departing to Biggin Hill and eventual amalgamation into the USAAF.

Primarily a grass stripped fighter base, Spitfires and Hurricanes were the most commonly seen aircraft here. Exceptions being the very brief visit of Tomahawks of No. 2 Sqn, Mustang MkIs of 26 and 239 Sqns, Typhoons of 198 and 182 Sqns (who were formed here in August 1942) ; Defiants of 264 Sqn; Lysander IIIA of the Air Sea Rescue Flight (formed here May 1941 and latterly 277 Sqn) and a detachment of Lysander IIs of 613 Sqn in September 1940. Thus a wide range of aircraft were to pass through Martlesham adding to the variety and diversity of its aviation history.

Many of those units to use Martlesham’s facilities were short stays, often passing through to other stations either in the U.K. or abroad. Some consisted of days whilst others were perhaps weeks.

In 1942, the airfield was designated as a U.S. Fighter base and the first real permanently stationed units would soon arrive. Following testing, they created two soil-stabilised, oil and tar mixture runways, linked together by steel pierced planking.  Also known as ‘Marston Matting’ or Perforated Steel Planking (PSP), these were strips of metal slotted together that meant no heavy excavations were needed and the tracks could be laid very quickly by small engineering teams. Once work had been undertaken, Martlesham Heath would receive the P-47s and latterly P-51s, of the 356th Fighter Group. 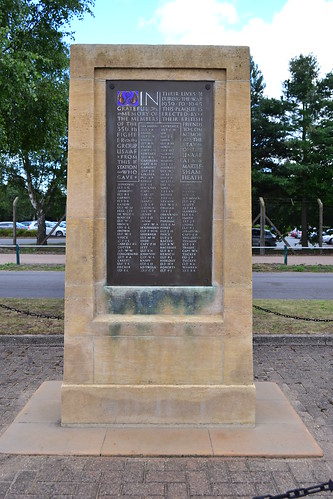 Memorial to the 356th FG based at Martlesham Heath.

By the time the airfield had been developed it covered a wide area, and because of it long history, it would consist of multitude of architectural features. Many of these dated back to the First World War and included aeroplane sheds (damaged in attacks) built to various drawings (e.g. 146/16-149/16, 110/16 and 1656/18); Type A aeroplane sheds (based on 19a/24 designs); aeroplane Type B ‘Goliath’ shed (1455/27); blacksmiths and welders workshops; a range of barrack blocks; married and single officers quarters; separate RAF and USAAF latrines; workshops; blister hangars; squadron offices and a wide range of associated buildings.

Around 70 aircraft dispersals were also laid using a mix of both an unusual square, and the more common pan style hardstands.

The 356th FG, arrived here in October 1943, after a 10 month journey that began at Westover Field, Massachusetts. They arrived in England in  August 1943 transiting from Goxhill to Martlesham Heath over the following weeks. Consisting of three squadrons: the 359th, 360th and 361st FS, they would initially be equipped with P-47D ‘Thunderbolts’ lovingly referred to as ‘Jugs‘.

The main duties of the 356th FG was as fighter escort covering the heavy bombers of the American Eighth Air Force as they penetrated occupied Europe. After initial engine difficulties, the P-47 proved to be a reliable and agile workhorse, much against the stereotyped view reflected by its resemblance to a ‘flying brick’. One of the first missions the 356th carried out was to escort a mix of P-47 ‘Thunderbolts’ of the 56th FG fitted with bombs flying in conjunction with B-24 ‘Mitchells’. This new strategy became known as ‘drop-on-leader’ whereby the B-24s would sight the target, and drop their bombs as a signal to the P-47s to drop theirs. The first mission to St. Omer was to produce poor results however, the B-24 bombing mechanisms jamming which resulted in all the bombs overshooting the target.

The 356th would be active throughout the remainder of the war, initially supporting bombers until January 1944 when they took on the role of ground attack, strafing targets such as U-Boat installations, Marshalling yards, Locomotives, airfield flak units and German radar installations. In June 1944 they supported the Normandy invasion going on to assist in the allied push through France,  the low countries and on into Germany itself. With ground attack and fighter aircraft being given almost free-reign, anything that moved became a target. Avoiding civilian areas and civilian traffic was a high priority and the perceived threat of friendly fire on troops below, a distant thought in the minds of the crews. However, not everything went according to plan.