Young men who died in service for their country, may their memories last forever.

On February 4th 1943, Lancaster III, ED496, ‘WS-P’ of No. 9 Squadron (RAF) took off from its base at RAF Waddington, Lincolnshire. On board were the crew members: Sgts Land, Packer, Gullery, Levesque (RCAF) and McGonigal all of the RAF (VR). This was to be a routine test flight for the crew, but it would end tragically for all those on board.

February 1943 was one of the mildest on record, experiencing low snowfalls and warmer temperatures across the country. However, on the fourth, particularly low temperatures were recorded, and during the night many aircraft on operations turned back due to associated icing problems. During that month there was a very low seasonal rainfall, particularly around Lincoln and the east coast area; with prevailing south-westerly winds, the weather was considered to be ‘fair’.

Lancaster WS-P took off on a routine air test, it was to undertake a number of circuits carrying out practice landings testing on-board equipment aiding such manoeuvres. At 16:00, the aircraft dived in to the ground crashing at Scopwick, north of Sleaford, Lincolnshire. With all its four engines still running when the aircraft struck the ground, the resultant crash led to an inevitable explosion and fire killing all on board. Whilst Sgt Land’s body was thrown clear, the remaining crew members were not and they remained trapped inside. The force of the crash buried the aircraft  deep in to the peaty Lincolnshire soil, rendering any recovery virtually impossible.

The crash was investigated by the Air Investigation Branch and their findings summarised in report W1458; but whilst no firm conclusions were drawn, it is believed that ‘structural failure’ of the air frame was to blame for the accident.

The aircraft and bodies remain in the ground to this day and a small monument has been erected in their honour. Sgt Land’s body was taken to Weston Longville, Norfolk, where he was buried in the grounds of All Saints Church. His companions are all honoured at the Runnymede Cemetery, Surrey.

The crew of Lancaster WS-P were: 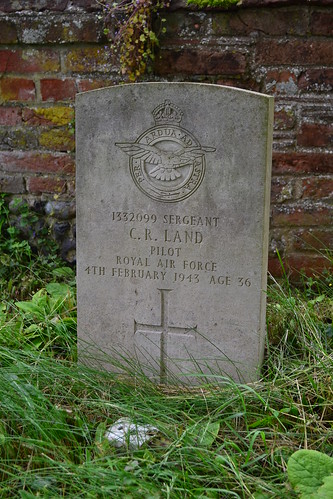 Sgt Land is buried in the grounds of All Saints Church, Weston Longville, Norfolk.