One of many young men killed in the Second World War whose stories deserve to be told. 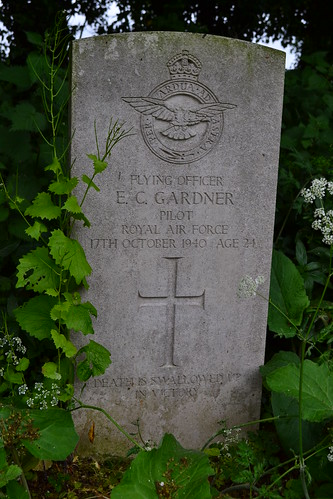 Flying Officer Edwin Charles. Gardner (s/n 72558) was stationed at RAF Hemswell with 61 Squadron flying Hampden Mk.I bombers. He was part of the RAF(VR) and was killed 17th October 1940 age 24.

61 Sqn (RAF), a former World War I unit,  was re-formed on March 8th 1937 at RAF Hemswell as a bomber squadron flying Audax aircraft. Over the next two years they would transition through a number of makes – Anson Mk I and Blenheim Mk I eventually equipping with the Handley Page Hampden in February 1939. They were formed as part of No. 5 Group, Bomber Command, and would take part in several prestige operations. During the early part of the war they would carry out the very first attack on a German land target, (Hornum, 19th/20th March 1940), the first major bombing raid on the German mainland (Monchengladbach, 11th/12th May 1940), and take part in the first RAF bombing raid on Berlin on the night of August 25th/26th 1940.

It was two months after this, that Flying Officer Gardner would lose his life at the age of 24.

Gardner’s aircraft, X-2979, QR-? took off around 18:00 to attack the German city of Merseburg. They would form part of a 73  strong formation made up of both Wellington and Hampden aircraft, attacking a number of targets at: Bremen, Kiel, Bordeaux and the Harz Forest, intending to set it alight with incendiaries. The force included aircraft from a number of squadrons that night.

The force attacked their designated targets successfully, returning home to the respective bases after having suffered very lightly (3 aircraft in total) over the target areas. On the return trip however, they encountered dense fog which, combined with technical problems with a number of aircraft, caused 10 Hampdens and 4 Wellingtons to crash, many with loss of life.

Reports show that Gardner’s aircraft contacted Hemswell twice in the early hours of the Thursday Morning to gain fixes on their positions. Possibly out of fuel, the aircraft finally came down at Sporle, a few miles west of Norwich, killing all four crew, members.

Flying Officer Gardner was laid to rest at All Saints Church Tacolneston, Norfolk a few miles west of Norwich. His companions were returned to their respective parishes. His grave stands alone in a quiet corner of this 13th Century church. May he rest in peace.

‘Death is Swallowed up in Victory’