The area around Attlebridge is steeped in historical value, archaeological finds have dated inhabitants of the area going back as far as prehistoric times; the Romans, Anglo Saxons and Normans have all left their remnants and marks. So too, has more modern man.

Initially built as a satellite for Swanton Morley, Attlebridge would eventually pass into the hands of the USAAF, receiving the designation Station 120 . As a satellite it was built with less ‘quality’ features than standard ‘A’ Class airfields, but this would not prevent its development or use by a range of single, twin and four engined aircraft of both the RAF and USAAF.

RAF Attlebridge Watch Office with Ops Room, the photo is believed to have been taken before the USAAF moved in. The office is a Type ‘A’ design (17821/40). and would have later additions to bring it up to improved standards.   (IWM)

Opened in 1941, initial occupants were the dispersed Blenheim IVs of 105 Sqn from the parent airfield RAF Swanton Morley. Operating anti-shipping roles, they were originally state-of-the-art aircraft but were quickly left behind in the development stakes as the war progressed. Their failings were soon revealed in front line operations and so activities were reduced to low-level attacks on shipping and coastal targets.

No. 88 Sqn (RAF) were the first permanent residents of Attlebridge. Having replaced their Blenheim IVs for Bostons IIIs in the previous July, they brought these new and updated American built aircraft to Attlebridge to continue the low-level attacks on the European continent. 88 Sqn would operate various model s of the Boston right up until their departure the following year and then subsequent disbandment later in 1945.

These were infant years for Attlebridge, and it was soon realised that upgrading was going to be needed if it was to be a serious contender. So reconstruction work began and the site was upgraded with new concrete runways, improved perimeters tracks and dispersal points.

Across the Atlantic, the American’s began their immense build-up, and in the Autumn of 1942, Martin’s controversial B-26 ‘Marauders‘ were flown in via the northern Atlantic route. Both Attlebridge and nearby-by Horsham St. Faith received the new crews. A period of training was undertaken that consisted of low-level flights across the English countryside, but Attlebridge remained a back-seat airfield, acting as a staging post before the Marauders along with the Twelfth Air Force, moved on to the Mediterranean Theatre. 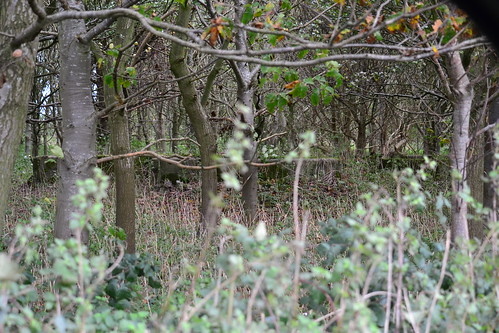 One of the many structures that remain swamped by undergrowth.

Little happened following their departure; the construction work was completed and the RAF returned with another American built model, the B-25 ‘Mitchell II’. 320 Sqn (one of three Dutch squadrons) brought these with them from RAF Methwold in the western regions of Norfolk; they stayed here until August 1943 undertaking a small number of operations in low-level raids.

A spate of Luftwaffe attacks on the East Anglian coast instigated a short stay by Typhoons of 247 Sqn (RAF) which saw them use Attlebridge as a stepping stone, moving through 12 airfields in as many months, a pattern that would continue well into 1947.

At this point, Attlebridge was assigned to the Eighth Air Force and further reconstruction of the airfield began. Improvements to the runways were made, new perimeter tracks, dispersals and technical areas were all added. The three original runways of 1,220, 1,120 and 1,080 yards, were by now increased to the standard 2,000 and two of 1,400 yards accordingly, each being 50 yards wide.

To accommodate the expected influx of 3000 crews and support staff, the accommodation sites would be increased to a total of 11: two communal; a WAAF site; sick quarters; a mix of officers, sergeants and enlisted airmen quarters and a sewage treatments works. Aircraft would be dispersed around a mix of both original and new ‘spectacle’ and ‘pan style’ hard stands, over 60 in total, with two T2 hangars and a blister hanger providing maintenance shelters. A larger bomb store – located to the east, would also accommodate the huge tonnage of bombs that was going to be required in the forthcoming onslaught over occupied Europe.

The scene was set and in February 1944, the Skies over Norfolk would reverberate with the sound of America’s most-produced, four-engined ‘heavy’ bomber. 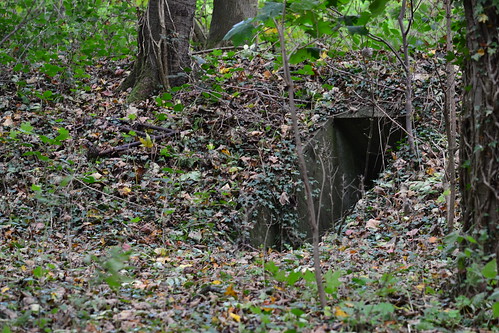 One of the many air-raid shelters that can be seen around the area.

The only major Group to be stationed at Attlebridge was the 466th Bomb Group, 96th Combat Wing, 2nd Air Division, who arrived in early 1944.

In February-March 1944 the 466th moved in. The air echelon transferred via the southern ferry route to England, the ground echelon taking the Queen Mary to Greenock. They were new, inexperienced in combat, and as ‘rookies’ this would be a major factor in their disastrous start to the war. 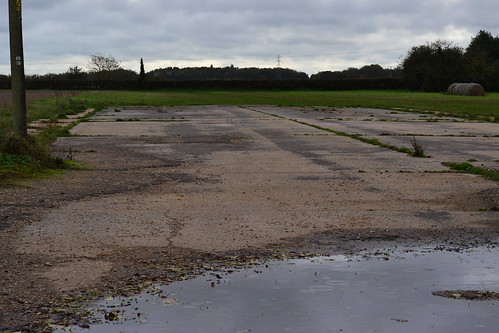 Many parts of the runways and dispersals remain in full width.

Their maiden operation, a mission to Berlin, on March 22nd 1944 would very quickly bring home the dangers of aerial warfare and close formation flying. Even though fighter attacks were non-existent, two B-24s were to collide with the loss of 13 of the two crews. B-24H ’41-29434′ “Terry and the Pirates” collided with B-24H ’41-29416 “Rebel Yell” after “Rebel Yell” was hit by flak. The resultant collision caused both aircraft to fall from the sky and crash West of Oranienburg, in Germany.

On the second operation, the following day, two more B-24s collided over Osterburg, and again heavy casualties were incurred. Onboard one of the aircraft, – B-24H ’41-29466 ‘Dark Rhapsody‘ – were three replacement crew members: Robert A. Gum (C/P), Bogan Radich (R/O) and Aleck A. Amich (TG), it was Amich’s first and only mission – suffering from his injuries, he died three days later in hospital. The two B-24s crashed into or near the Zuiderzee, in the north-west of Holland, where fuselage parts of ‘Dark Rhapsody‘ were later recovered in 1981. Only three of either crew survived taken as prisoners of war. 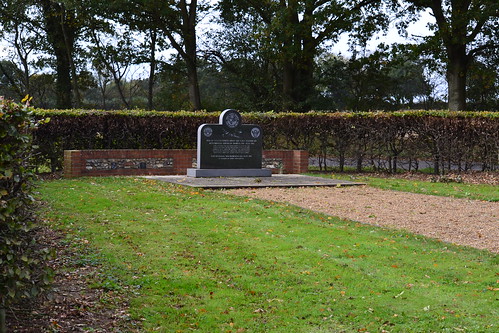 A memorial stands to the south-west overlooking the former technical site.

Then a third collision on the 27th March meant that six aircraft had been lost in five days with little or no enemy intervention. It was not a good start for the freshman of the 466th!

In an attempt to reduce these collisions, which occurred throughout the war, war-weary B24s were stripped of their armaments, painted bright colours and patterns, and lit up so formating aircraft could identify their correct path and position in the formation. Known as ‘Forming Ships’, ‘Circus Leaders’, ‘Judas Goats’ or more commonly ‘Assembly Ships’; they were painted in bizarre patterns and carried a huge quantity of pyrotechnics, that itself being a danger to the operating crews. Many units operated their own assembly ships for this purpose, the 466th using a former 44th BG B-24 ’41-24109′ painted entirely in red zigzags.

The 466th BG would recover from this terrible start and go on to operate in a strategic bombing role, attacking targets such as: Liege; Brunswick; the Bohlen oil refineries; Kempten aircraft plants; Hamburg; Saarbrucken; Misburg and airfields at St. Trond. They supported the Normandy landings, the St. Lo breakout, hit communication and transport links during the Battle of the Bulge, and supported the Rhine Crossing. They would fly their last mission on April 25th 1945.

The 466th BG would not suffer as badly as many of the other groups did. Their initial entrance in the war marred by losses, would soon fade away. By the war’s end they would complete a total 232 missions, a remarkable achievement in just over one year. A total of 5,762 operational sorties would see 12,914 tons of bombs dropped on enemy positions. They would lose ‘only’ 47 aircraft in action with a further 24 others being lost as ‘other’ loses. The 785th BS had the enviable record of 55 consecutive missions without loss, but the 466th were to also suffer the last aircrew casualties of the entire Eighth Air Force.

After the USAAF pulled out, Attlebridge was returned to RAF ownership, it was put under care and maintenance and retained until sold off in 1959.  It is now owned by the Bernard Matthews company and as with many of the airfields that adorn Norfolk, they are now used to house Turkey sheds.

Views along one of the runways

The main runways and perimeter track of the airfield are very much evident and in a good state. As this is private ground, access is not permitted, but good views across the tracks can be gained from the local road. There were minimal visible signs of standing buildings, but the control tower was extended and is used by the management of the site.  More careful probing will reveal signs of buildings and  the bomb shelters laying waste amongst the trees. It is possible to drive round the entire site, being only feet from the perimeter track at any one time. Amongst these trees evidence can be seen of the airfields perimeter track. Odd derelict buildings lay swamped by vegetation and trees. At entrances to the site, good views along the runways give a perspective of the size of the place. Hard standings and concrete dispersal pens lay on either side of the road, now used to store sugar beet and other produce cultivated by the local farmers.

The accommodation sites, widely spread to the south-east, have little in the way of visible structures, although some huts are still used by small businesses and remain in reasonable condition.

The blister hanger still stands, although it is now showing signs of wear and its life may well be limited. Whilst large parts of the airfield have survived and survived well, many of the spectacle dispersals have been reduced, in some areas completely removed, presumably for hardcore, and only the tracks through the bomb store remain through the trees.

The western end of the main runway, perimeter track and connected dispersals have all been removed, the public road (Breck Road) now cutting through what was the main technical area. It is the only part that utilises any of the original perimeter track.

It is along this road, only feet from one of the dispersals, that there is a memorial dedicated to the crews of the airfield who served here.  A well-kept memorial, it portrays a Liberator of the 466th, 2nd Division, 8th Air force, ‘The Flying Deck’ and the badges of each of the four bombardment squadrons. It tells of the combat missions over Normandy, France, the Rhineland and the Ardennes. Dedicated in 1992, 50 years after the end of hostilities, it serves as a little reminder of those brave souls, who gave their all from this small part of Norfolk.

Attlebridge had the dubious honour of having the last crew to be shot down over Germany fly from it. As with other sites, its easy to picture a bustling base, aircraft rumbling along preparing to take off on what may be their last flight. Where man once stood, turkeys now breed. 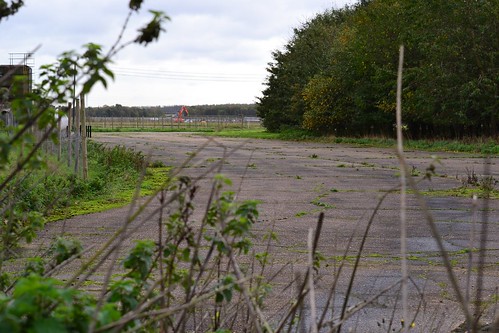 One of the Dispersal pans at Attlebridge.

Whilst visiting Attlebridge, it is worth taking a short journey westward to Hockering Wood, a site of Special Scientific Interest and one that is also steeped in history. More recently, it served as a massive bomb store, and evidence of its activities still remain.

(Attlebridge was visited in 2014 this page has been revised.)

Attlebridge forms a Trail taking in a number of airfields in this region all of which are covered in Trail 7.