In this revised trip, we go back to Woodhall Spa, and visit the former Bomber Command airfield, famed for its crews, missions and aircraft. Woodhall Spa is a remarkable airfield, yet it is hardly known, or recognisable today.

RAF Woodhall Spa was originally built as a satellite to RAF Coningsby a short distance away, and opened on 1st February 1942. It was built with three concrete runways; two of 1,400 yds (1,353 m) and a third and main runway of 2,000yds all 50yds (46 m) wide. The site like other Standard ‘A’ class airfields had two T2 hangars and one B1, thirty-six pan-style hardstands and numerous support buildings scattered around its perimeter. Accommodation was spread over 7 sites, along with a WAAF, sick quarters and 2 communal sites all located to the south-east. The technical and administrative sites were also to the south-east side of the airfield between the accommodation areas and the main airfield.

A bomb store was well to the north and the main entrance to the north-west. A range of accommodation and technical style huts were used, Laing / Nissen / Seco and a Watch Tower to drawing 15956/40. 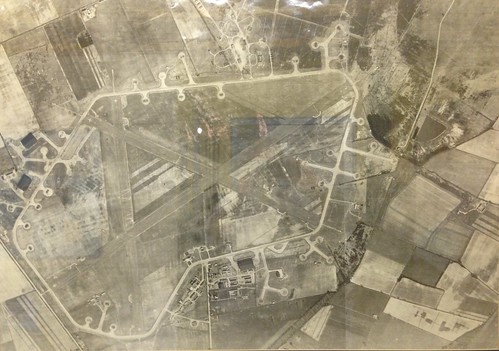 An aerial photograph of Woodhall Spa taken post war. The B1 and T2 hangers can be seen to the north-west, a further T2 to the south. The accommodation block are below the frame. (Taken from a photo at the Thorpe Camp museum).

One remarkable features of Woodhall Spa was the installation of six arrester gear units on the runways. These were designed to prevent aircraft overshooting the runway and were installed during the building programme. Some 120 units were manufactured in all but only a handful of sites had them. On October 22nd 1942, the Woodhall Spa units were tested using an Avro Manchester from the Royal Aircraft Establishment and all went well. However, as the war progressed, reservations were registered about such a technique and the units were never used ‘operationally’ in any of the allocated sites.

At the same time that Woodhall Spa opened, the newly equipped Lancaster (Mk I & III) squadron, 97 Sqn, moved from RAF Coningsby into RAF Woodhall Spa and within a month were flying operations from their new home. However, their first operation, mine laying, was to be fatal for three aircraft, cashing on the journey home. This was not to be the general theme for 97 Sqn though. For the next year they would prove themselves more than capable, hitting many targets accurately with bravery and courage.

The following March (1943) the main bulk of 97 Sqn moved to Bourn to form part of the new Pathfinder force, with detachments at Graveley, Gransden Lodge, Oakington and a further section remaining at Woodhall.  On April 18th 1943, 619 Sqn was formed from the Woodhall Spa detachment retaining their Lancaster Is and IIIs. However, their stay was very short; they moved out to Coningsby in January 1944 and were replaced overnight by the famous 617 (Dambusters) Sqn*5.

During their year here, 619 Sqn would prove themselves further in raids over the Ruhr, Düsseldorf, Oberhausen and Krefeld. Casualties were light during these early missions, but in the following August (1943) the RAF a mounted a massive raid consisting of 596 aircraft on the V2 rocket site at Peenemunde. Three of the twelve aircraft sent by 619 Sqn would fail to return. 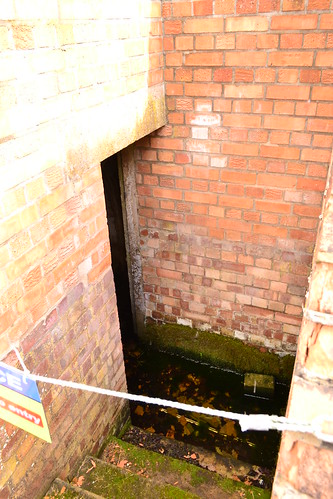 When 619 Sqn moved out, 617 Sqn moved in. Lead by Group Captain Leonard Cheshire, 617 Sqn were the elite of 5 Group, Bomber Command and accordingly were to be assigned some of the most difficult and outright dangerous precision bombing missions.

Throughout 1944, 617 Sqn would have many near misses, and losses, ranging from low-level bird strikes to fighter attacks and flak. Targets varied considerably including those at: Limoge (aircraft engine factory), the Antheor Viaduct, Albert, St. Etienne and Metz (aircraft parts factories); many using the new ‘Tall Boy’ 12,000lb bomb.

On 15th April 1944, 617 Squadron were joined by 627 Sqn and obtained some D.H. Mosquito VIs, using these to good effect in the Pathfinder role while their Lancasters continued with the bombing. In June, they had a small respite from bombing missions and on the day of the Allied Invasion, they were tasked with dropping ‘Window’ over the Pas-de-Calais to fool the Germans into believing the invasion force would strike there. 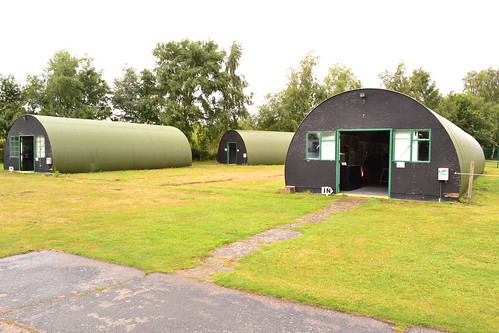 A handful of huts and buildings remain.

Throughout the remainder of 1944, 617 Sqn continued to use ‘conventional’ and Tall Boy  bombs on prestige targets like U-boat pens and the Samur Tunnel. Cheshire found himself handed a P-51, and after having it unpacked and engine tested, he used it to mark a V1 target to which 617 struck a devastating blow.

Further major targets were to befall the wrath of 617 Sqn. Flying 2,100 miles to a forward operating base at Yagodonik with Lancasters from 9 Sqn, they attacked the German main Battleship the ‘Tirpitz’. During the mission, for which they had long-range fuel tanks, of the 38 aircraft that set off, six were to crash on the outward journey, one turn back and one to crash on the return. The Tirpitz however was to remain ‘unsinkable’ for some time. It would take two more return trips by 617 Sqn from Lossiemouth to finally sink the ship, the last being on 12th November 1944, with the loss of 1000 German sailors.

Bombing and pathfinder operations for Woodhall spa crews continued right up to the end of the war. Early that year they would start to use the new ‘Grand Slam’ 22,000lb bomb, with their last operational fatality being on 16th April 1945. That was not the end for Woodhall Spa though. The famous Guy Gibson drove here and ‘borrowed’ a Mosquito of 627 Sqn against a backdrop of changed minds, mishaps and misjudgements, the resulting crash leaving him dead. 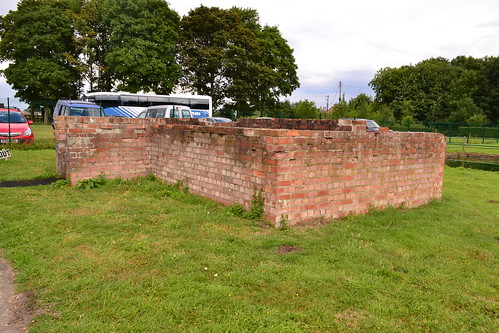 Woodhall closed soon after the war ended, but it was identified as a suitable location for Britain’s air defence missile the ‘Bloodhound’ and on May 1st 1960, Woodhall Spa became the base of 222 Sqn with Bloodhound MkI missiles. These were disbanded in June 1964 and replaced by Bloodhound Mk IIs of 112 Sqn on November 2nd 1964. These stayed until 1st October 1967 when they moved to Episkopi in Cyprus.

After the removal of the Bloodhound squadron, the RAF continued to use a small site near to the main entrance, utilising the 617 Sqn T2 hangar and other ancillary buildings as an engine maintenance and testing facility. This too has since closed and the main use is now as a quarry. 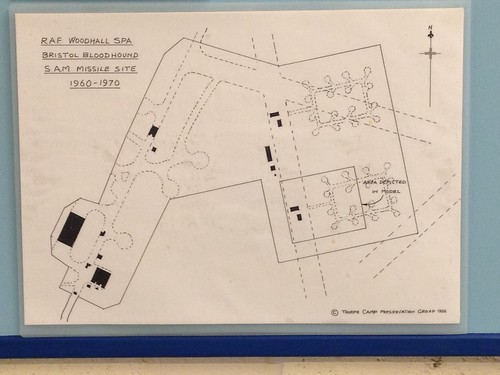 A long and distinguished life, Woodhall Spa’s operational losses totalled 91 aircraft, of which 74 were Lancasters and 17 Mosquitoes. Daring and brave crews, they gave their all for freedom and the love of flying.

Today little exists of this former airfield. Being a quarry and partly MOD, much of the  land it is not accessible to the general public. Most of the buildings have long since gone and the runways mostly dug up. A few minor concrete ‘side roads’ are in situ and with searching some evidence can be found. The tower was demolished just after the war as were many of the other buildings and huts. Steps have now been taken to turn whats left into a nature reserve (see post dated 4th July 2015) and a memorial has been placed at the intersection of the runway remains. The best remnants can be seen a little way to the south-east at the former No 1 communal site at Thorpe Camp (see below). 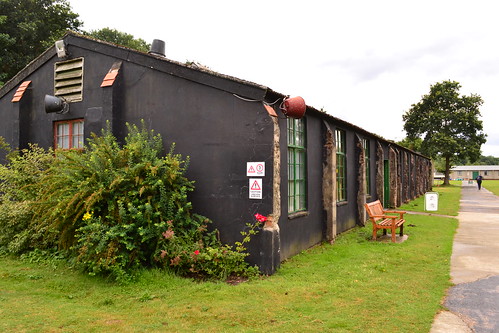 The former NAAFI for 469 airmen and 71 officers.

A small number of buildings remain here utilised now as a museum. These include a war-time NAAFI able to accommodate 469 airmen and 71 officers, the ablutions block, ration store and various Nissen huts. A bomb shelter is also here, now flooded and blocked off along with other part brick structures.

In the adjacent woods, the airmen’s quarters and other buildings can be found, now derelict and in a dangerous condition. Odd buildings are scattered about the various sites but these too are few and far between.

Considering the history of Woodhall Spa, the men who flew from here, the operations they undertook, the testing of revolutionary equipment, the new and deadly bombs, it has suffered possibly greater than most and much of this history, if it were not for the Thorpe Camp museum, would now be lost forever. Now it has become a nature reserve in part, then maybe, just maybe, the footsteps of those who were stationed here may once again be walked by others and their memories brought back to life.

This is an updated trail part of Trail 1 Lower Lincolnshire.

6 thoughts on “An airfield that holds a tremendous history, yet little exists.”