A little more light-hearted look at the 1940s away form the disused airfields of Britain.

These last two years have been significant years in terms of both the First and Second World Wars. With the 100th anniversary  of the start of WWI last year, the 75th anniversary of the Battle of Britain this year, VE-day and of course to come VJ-day commemorations, there has been an understandable increase in interest in all things Second World War.

One thing I have noticed in particular, is the increase in numbers at 1940s weekends, in both participants and visitors.

Vehicles of all shapes and sizes came for the weekend.

I myself have been to two recently, and at one I got the chance to sit in a Spitfire cockpit. Not something you do every day!

I know these events are not to everyone’s taste and some will groan at the thought of it, but I do think there is an historical value to them. Many of the participants only use genuine clothing or equipment, much of what you see is rare and in all cases they are only too keen to talk about what they have, its history, how and where it was used and in some cases, allow you to hold the articles in question. 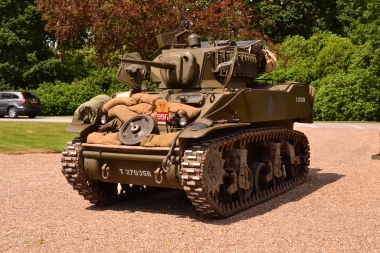 The rumbling of tanks could be heard once more.

From another perspective, and for those of you who know my day job, there are too, a growing number of children attending these events which I believe is a good thing as it brings history to life – something that is very difficult in a school classroom. A gun in school? I can see the headline now!

Two events I recently attended, both for different reasons, were at Woodhall Spa and Baston, two small villages in ‘Bomber country’, Lincolnshire.

Woodhall Spa was the home to the Dambusters, and for one weekend each year the entire village steps back in time to the 1940s. A second invasion occurs. Walking along the high street is like walking along in 1940, uniforms of every description can be seen, from RAF aircrew to British Army, U.S. infantry, Canadian, and even a variety of Russian, Luftwaffe and German infantry. Even the 1940s housewife, ‘spiv’, Firemen, Policeman and Milkman are represented in full 1940s attire. Many of the vehicles that line the numerous side streets are authentic World War II vehicles, half-tracks, trucks, endless jeeps and even the odd small tank driven here on trailers or under their own steam. Owners have taken a lot of time and money to get them rebuilt and keep them going. 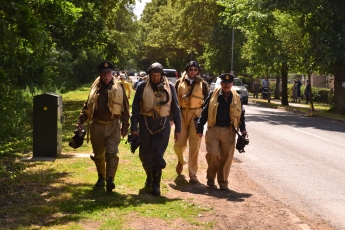 At the Petwood Hotel, used by 617 Squadron as a mess and officers quarters, there are re-enactments, talks and even ‘briefings’ in a 1940s style. The BBMF perform short displays over the grounds of this small village adding to the feel and as always people stop and watch in awe as once again a Spitfire, Hurricane and Dakota fly low over the streets of this small Lincolnshire village.

Inside the Petwood, you can wander the rooms that 617 Sqn once wandered by Guy Gibson and his crews; drink a tea or refreshing beer in the same room they did. The Squadron bar, displays numerous letters, photographs and other memorabilia connected with 617’s stay here. It is a remarkable place to be, knowing you walk the same ground as those special crew members did some 70 years ago.

Outside in the manicured gardens among the rhododendrons singers perform the many songs that inspired a nation, bolstered our morale and kept us going through those dark days of the Second World War. The feel is very much 1940s. 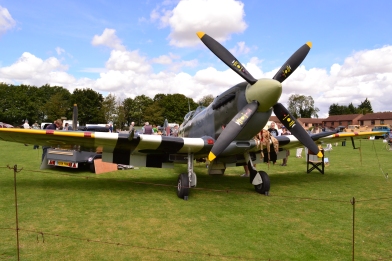 Spitfire that is about 80% original.

Baston was very much the same. A large participation of re-enactors, vehicles and uniforms, many rasing money, good money, for War Veterans – a valuable cause I’d say. But it is the most odd feeling to walk amongst uniforms that once fought to the death and that were feared by those who were governed by them. In the summer and autumn of 1940, Britain came so close to being invaded, today an invasion has taken place.

Whether you like them or not, these events do have a place in our ‘living history’ and thankfully now, at least, it is on friendly terms.