Mixing my day job with my hobby is not usual but I felt this was more than worthy of a post.

For some time now I have been toying with the idea of a Memorial Garden at school tied in with the various topic work that we have been doing, which is linked to both the World War I and VE-day commemorations.

The idea really came to fruition in sort early last year when I approached the head of the school and put the idea to her. With enthusiasm the go ahead was given and the children were approached with the idea as an after school club. A small group volunteered to help and we began planning.

The Memorial at the Centre of the Garden.

As people arrived they were greeted with refreshments and displays of work, photos of family members along with artefacts gathered or brought in by friends and parents. My good friend Kevin Fleckner brought four original uniform and bits from a crashed B-17 for us to show.

At 17:15 two RAF Tornado jets from RAF Marham flew overhead. The first low and slow, the second 15 seconds behind, higher and much faster with her wings swept. Over the school, she banked and the crowd waved. The event had opened.

The head then read a short introduction and it was my turn. I have to tell you that public speaking is not my forte and whilst I had been a little nervous I stood at the podium and the nerves vanished. My speech went thus:

June 18th 2015 is a special day. Not just because we’re opening this beautiful space, but for several iconic reasons. 200 years ago today the British and French forces were locked in arms at the Battle of Waterloo. 75 years ago today Winston Churchill made his famous “this was their finest hour” speech. Two dates that will go down in history as both important and momentous.

But these ae not the only significant dates in history.

100 years ago last year in 1914 young men in their thousands signed up with excitement for what they thought would be the war to end all wars. However, the war they thought would be over by Christmas went on for four long years. In the killing fields of Flanders, young men, many barely older than 16 or 17 were slaughtered in their thousands, living in mud and rat infested trenches very few were to survive. If not killed by the constant shelling, sniper fire or the slow march through no man’s land, many would suffer shell shock, a brutal psychological illness that would eat away at the very heart and soul of the young men. Eventually, in 1918 the First World War ended, the guns fell silent and Europe could finally begin rebuilding once more.

Sadly man’s inhumanity to man was to raise its ugly head again. In 1939, Europe was plunged once more into war with the German invasion of Poland. As The mighty Nazi war machine blitzkrieged its way across Europe, the British Armed Forces once more fought bravely in the name of freedom and democracy.

From the beaches of Dunkirk to the defence of Britain in the skies over Kent, the landing grounds of Normandy, to the battles in the Ardennes, Arnhem, over the Rhine and eventually the battle for Berlin itself, the brutality of war would once more be seen again.

The civilian population of Europe was to suffer greatly too. The blitz of our cities and the bombing of European targets that killed thousands upon thousands as bombs rained down from the sky. The concentration camps, death camps and prisoners of war camps saw a brutality on a scale that was and still is, incomprehensible.

From the hot deserts of Africa through the warm seas of the Mediterranean to the freezing conditions of the Arctic convoys, young men would bravely fight without question many paying the ultimate and final sacrifice.

Eventually, on 8th May 1945, the war in Europe finally ended and Peace reigned once more. However, the killing went on in the Far East. On the Pacific Islands of Okinawa, Saipan, Iwo Jima and Guadalcanal, The fighting continued in some of the most brutal conditions known to man. Eventually on August 15th 1945. UK time, following the Americans dropping the world’s most devastating and horrific bombs on Hiroshima and Nagasaki, war was declared finally over. The world has now entered the atomic age and six years of war had left it scars across Europe, the Middle East, The Far East, in the waters of the Atlantic and Pacific Oceans and across both the northern and Southern Hemispheres. Across the world millions lay dead, injured, homeless or orphaned. In the words of our distinguished guests here today “There are no winners in war.”

If there is one thing that history can teach us, it is that man is unable to live at peace with his fellow-man. Whether it be disputes over territory, natural resources or religious ideologies, War has continued to be fought and young men and women have continued to die.

In post-World War 2, the world lived on a knife-edge; the Cuban missile crisis being the ultimate stand-off between the east and west. From Korea and Vietnam to the Falkland Islands, the Middle Eastern countries of Iraq and Afghanistan, Britain and her allies have continued to fight for peace and democracy something we here take very much for granted.

It is in the name of these young men and women that we have built this memorial garden, so that their memories and their sacrifice may live on in the hearts and minds of future generations. It is so that we can pay homage and remember the dedication, bravery and self-sacrifice that they have shown so that we may live today without fear and in freedom.

It is to these people that I say thank you. Thank you for willing to lay down your life so we may freely speak out against injustice. To those who never came home, who paid the ultimate sacrifice, may you forever rest in peace. Thank you

Next one of the children read what the garden meant to him. Un-nerved by the occasion, he told how his father passed on his grandfathers tales of the war, how it means he can enjoy the peace and tranquility and he made a remarkably moving speech from the heart.

We then had a young lady from the group read in full the Robert Lawrence Binyon poem ‘For the fallen’. Short gasps from some of the audience told me they didn’t realise where the Remembrance Day words came from as it appears in the middle of the poem. She too read fluently and without falter, quite an achievement. Both these children were only just 10/11 years old.

A blessing by the vicar led us into the last post and a two minutes silence for those who had paid the ultimate sacrifice. A number of visiting Vets saluted, the Air Training Cadets lowered the colours and all went silent. Not a sound bar the cool wind in the adjacent trees. 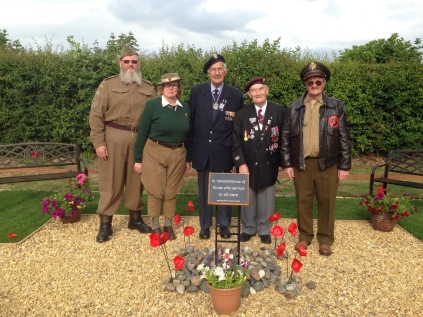 My Good Friends Baz and Helen, whom helped enormously, John and Tony the Veterans and Kevin, who brought a number of uniforms and bits for us to display.

After the reveille the colours were raised and the two veterans invited to open the memorial officially. One Tony, a Normandy D-day+1 vet and the other John, who fought from Africa against Rommel’s Tigers, through Italy up into the continent, stood either side. As they lifted the flag, John declared the garden open to applause from the gathered audience. The children then sang unaccompanied Vera Lynn’s “We’ll meet again”; many from the audience joined in. The event closed and photos were taken around the memorial.

I estimated around 150 people, which for a small school of 68 children is remarkable. We had veterans from Cambridge a good hour and half away,  visitors from Northampton another similar distance and a large number of folk from the village turn up.

The seating before people started to arrive. There were many more standing, being a small school. we simply didn’t have enough chairs!

The feedback from visitors was superb and everyone was buzzing.

A real team effort, the long evenings, the hard work and recent battle against moles had all been worth while.

We had texts and emails from those who were there praising the efforts. It all worked out far better than even I had envisaged.

We shall miss it. We had great fun, even the odd beer or two, but it has been a real bonding exercise, we have become a little ‘family’ and are really proud of our achievements.

I passed on the good wishes to the children whom I think are quite overwhelmed themselves. They did a fantastic job and were superb role models for others to follow.

The Garden as it is today. We shall seed the outside, and continue the fight with the moles. An area for relaxation and thought.

We shall continue to nurture and maintain the Garden and watch it grow. The children use it already and do enjoy it. The rose in the crown were the poppies. Made out of clay, they are all handmade by the children mounted on metal rods and bunched in groups of 3 or 4. They do look superb.

There were small stumbling blocks along the way, and these caused delays but none so great we couldn’t deal with them. All in all it went beautifully, far, far better than I ever imagined and the finished product, I hope you’ll agree, is stunning.

An article appeared in the paper on the following day, Saturday here’s a link.

Two tornados fly over a tiny school at Tydd St Giles as a tribute to their memorial garden: A tiny Fenland sch… http://t.co/BTYadknh1s